Over here at TST, we’ve been following one of our favorite little riders, Julian Correa. We received an update from his team about all of his race adventures this past October. Julian had a very busy month planned in October, with races all across Florida and Georgia. Unfortunately, due to a hurricane, most of those events were cancelled. In true Julian style, he still made the best of it and made it to as many events as possible. 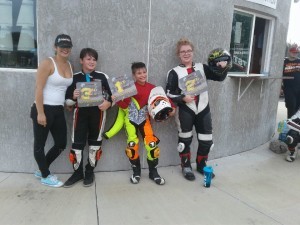 His first race of the month was the Kids One-Hour Ironman race with SFLMINIGP at the beginning of October. The race rules were simple: race for one hour around Bushnell Motorsports Park track, only stopping for the fifteen minute mandatory water break intervals. The racer who completed the most laps in that hour wins the race. Julian managed to clock 49 laps at an average pace of a 1:07s, with his fastest lap being a low 1:06 on his stock CRF110.

The second and third races of the month were supposed to be with the AMA Pro Supermoto circuit in Pensacola and at the Herrin Compound. Not too long before that, Hurricane Irma decided to come through and threw a wrench in that plan. Unfortunately, those two races were cancelled.

The next scheduled event of the season was Sprint Race #7 with SFLMINIGP. It was an incredibly busy weekend for Julian, running three different classes.  All of the races took place at the Orlando Kart Center, including the Arai Helmets Spec50 class, the Spec110 class, and the F2 Adult class.

Starting off with the Spec50 race, Julian had a few issues and made a few bad calls that cost him the top podium spot. Not all was lost though, he still ended up finishing third – Not too shabby. With two more races to go, there was still plenty of opportunity for redemption. In the Spec110 race, the young riders get to grid up with the adult racers. Julian started 15th on the grid, which added a welcomed challenge of carving through the field. During this race, he managed to climb to third place overall and first place in his class. This finish definitely made up for the previous race. The final event of the weekend was the F2 race, the one Julian was looking forward to the most. Despite the fact that Julian was super nervous, this being the first time he’d raced his Kx65, he was constantly improving each lap time. After qualifying, he managed to snag the number 9 grid spot out of 18 for the main event. Once the race started, it was clear that this would be the most challenging event for Julian. Turn one was a bit of a surprise, and it ended up squeezing him all the way to the back of the pack. After battling the entire ten lap race, he managed to finish in the number 7 spot.

Overall, it was a successful weekend with (1) third place finish in Spec50, (1) first place finish in Spec110, and a 7th finish in the F2 class. Keep an eye out for Julian in the upcoming months. He’s got more events coming up, including the Herrin Compound races and the final SFLMINIGP event.